My name is Miklós Ferencz. I’m a graphic designer turned typographer. I’m the sort of person who when ‘puts pen to paper’ draws letters instead of writing words.
‍
Typography and book design are what truly float my boat, but I’m always on the prowl for exciting web design ideas and new experimental mediums. I also have a slew of experiences under my belt that attest to my perennial love for learning and discovery. If you’d like to know more about me, here’s a quick rundown:
I did typographic research at the Atelier National de Recherche Typographique (ANRT), Nancy, France; I earned my Master of Arts degree in Graphic Design at Moholy-Nagy University of Arts and Design, Budapest (MOME); I studied graphic design for a year at Haute École des Arts du Rhin, Strasbourg (HEAR), at the graduate level; and I spent a year in St. Joost University, Breda, doing experimental design and studying conceptual graphic design.

I diligently toiled as an art-director and a full time graphic designer in Budapest for a while, but I also worked as a freelance graphic designer taking on a spade of exciting projects. I’ve done work for the European Parliament in Brussels, the Central Theater and Metro4 in Budapest, the Shearsman Books, University College London and Boiler House Press in the UK, Blue Pearl Stone in Chicago, Illinois. My work entailed custom typefaces, visual identities, posters, pamphlets, websites, books and a multitude of other stints. I’m also a typography lecturer at Moholy-Nagy University of Art and Design, Budapest.

Based on the work of the Constantin widows – whose foundry operated in Nancy, France, during the 19th century – I designed this didone style bold typeface. (Caractères de la fonderie de veuve Constantin ainé et Constantin jeune, à Nancy, Meurthe.)
My work offers an interpretation on the original typeface design, and the first sketches were specifically based on the “gros canon” body size letters. In this design, the thick and thin lines are highly contrasted, the stroke terminals end in a round form, and sharp cuts evoke a contemporary feel.
This typeface was originally designed with displays in mind, such as posters. In order to make it applicable to shorter texts and highlights, it was later modified so as to function as a bold weight and heavily contrasted body typeface. The addition of a variety of weights, such as thin, regular, and bold, is still to come. 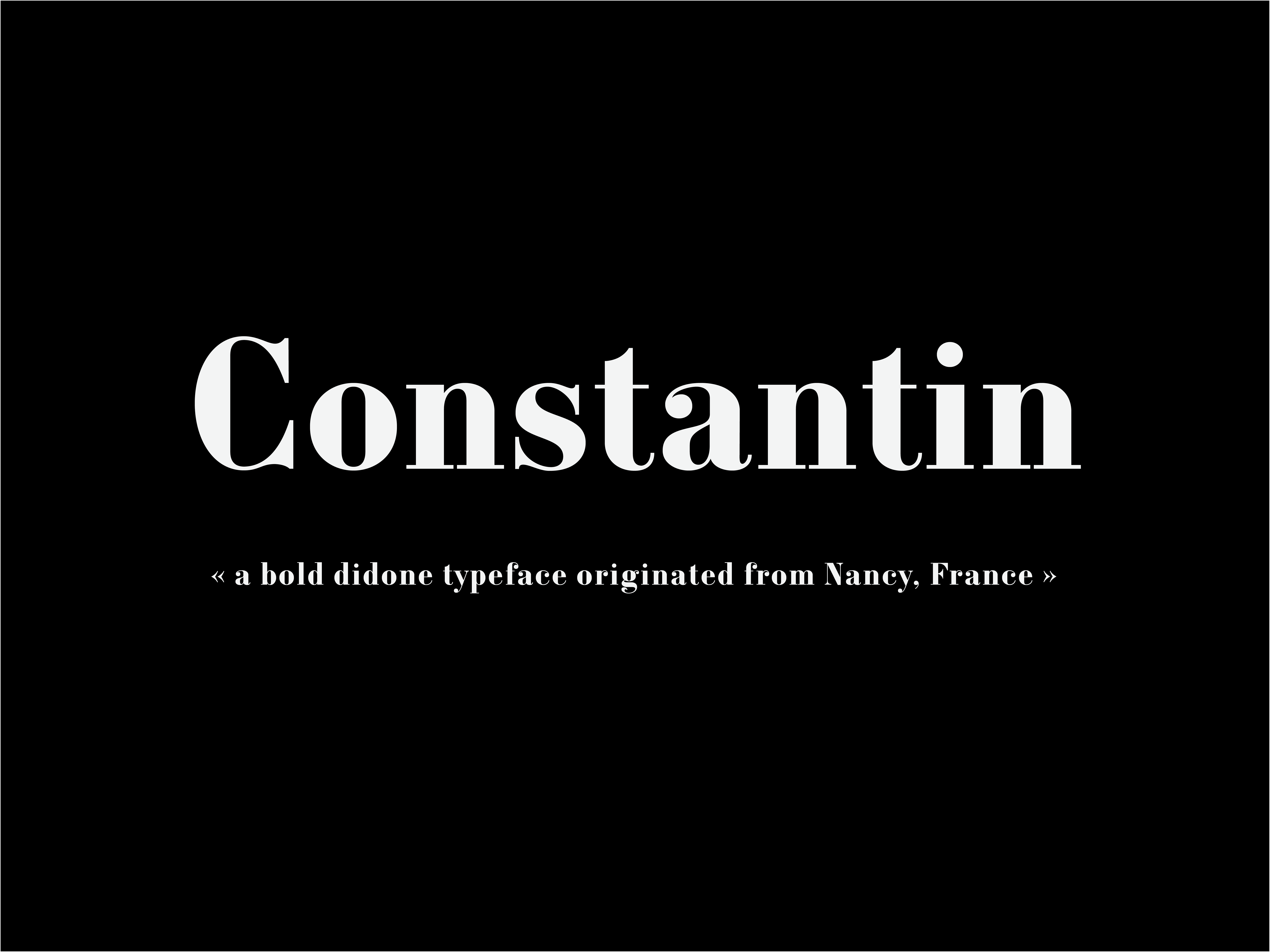 Our Desktop Licence permits the use of our desktop font(s) in printed works, online as static images and embedding into documents. The font may be installed and used at one location and by the maximum number of users specified on your receipt / invoice. Please ensure you read the full terms of the Desktop Licence

Our Web Font Licence permits the use of our web font(s) on web servers you control using the CSS @font-face technique. The licence covers one domain and the maximum number of monthly page views specified on your receipt / invoice.Please ensure you read the full terms of the Web Font Licence

Our End-User Licence allows you to install the fonts on any number of devices which you own or solely control, for simultaneous use by up-to-the-number of users specified. It allows you to print and produce personal or business documents, including PDFs, but this licence does not include webfont use, ebook distribution, or app distribution.

End-User Licences start from €15 for one font for a single user.

Read the full End-User Licence below:
By downloading this font package (“licensed fonts”), you are agreeing to be bound by the terms of this agreement. This agreement, in conjunction with the receipt that accompanies each purchase from Serifmag.com (“Serifmag”), constitutes the complete agreement between you and Serifmag.

With Constantin being a didone style typface, the axis of the ‘o’ has a precisely vertical stress, as well as that of the ‘e’, ‘g’ and all the round letters. In many cases, the stroke terminals are ball shaped. However, rather than bridging the ‘ball’ and the stroke with a lightly curved arc, the terminal is adjoined in an acute angle, signifying the insertion of the typeface into the digital medium. The contrast between thin and thick lines is abrupt and dramatic, and the width of the thin strokes is always the same and is equal to the height of the serifs. The serifs are un-bracketed and thin. In sum, the typeface was constructed in a systematic and logical fashion: the shapes can be divided into separate groups, creating a coherent system, and rendering the texture vibrant yet legible. 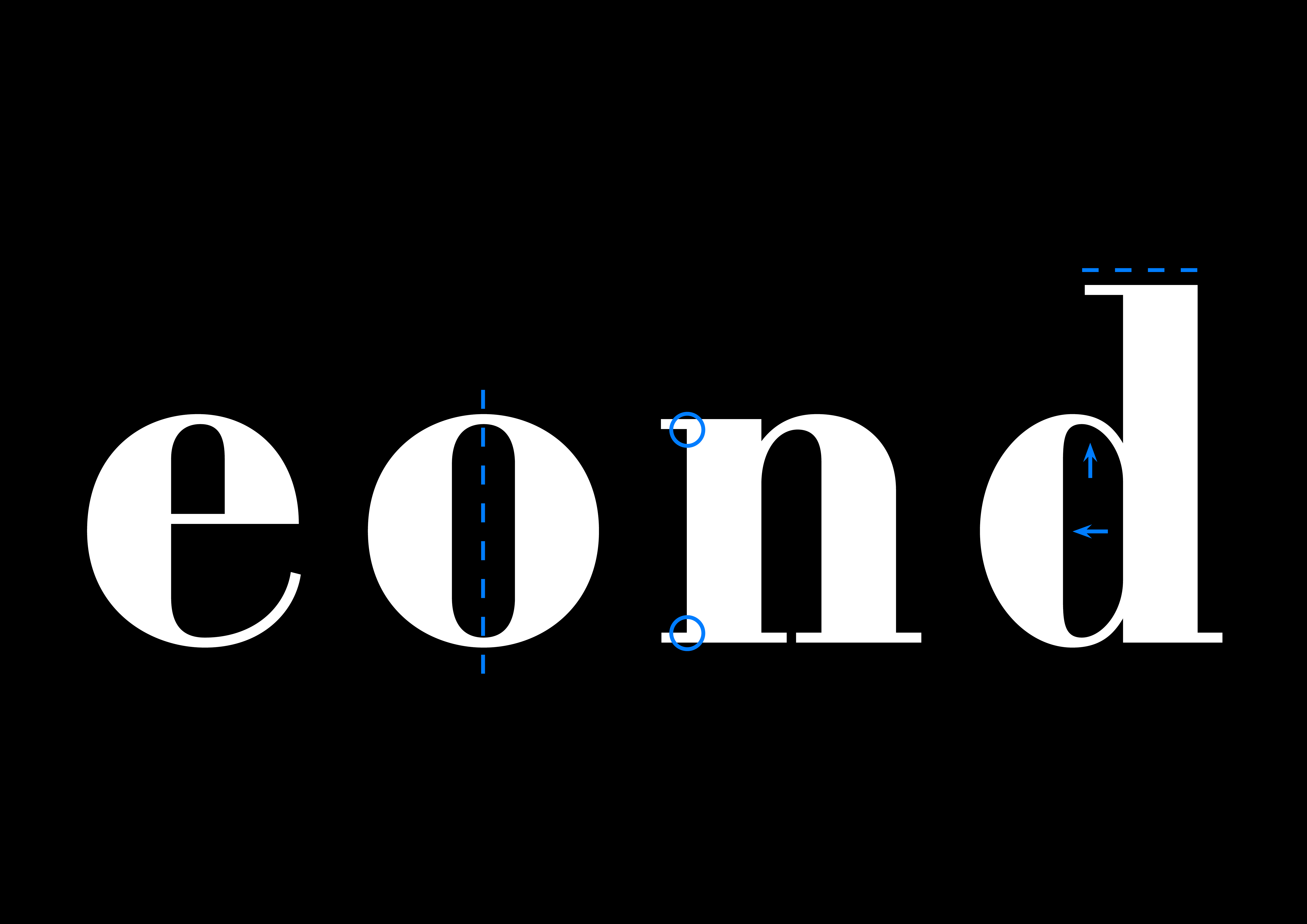 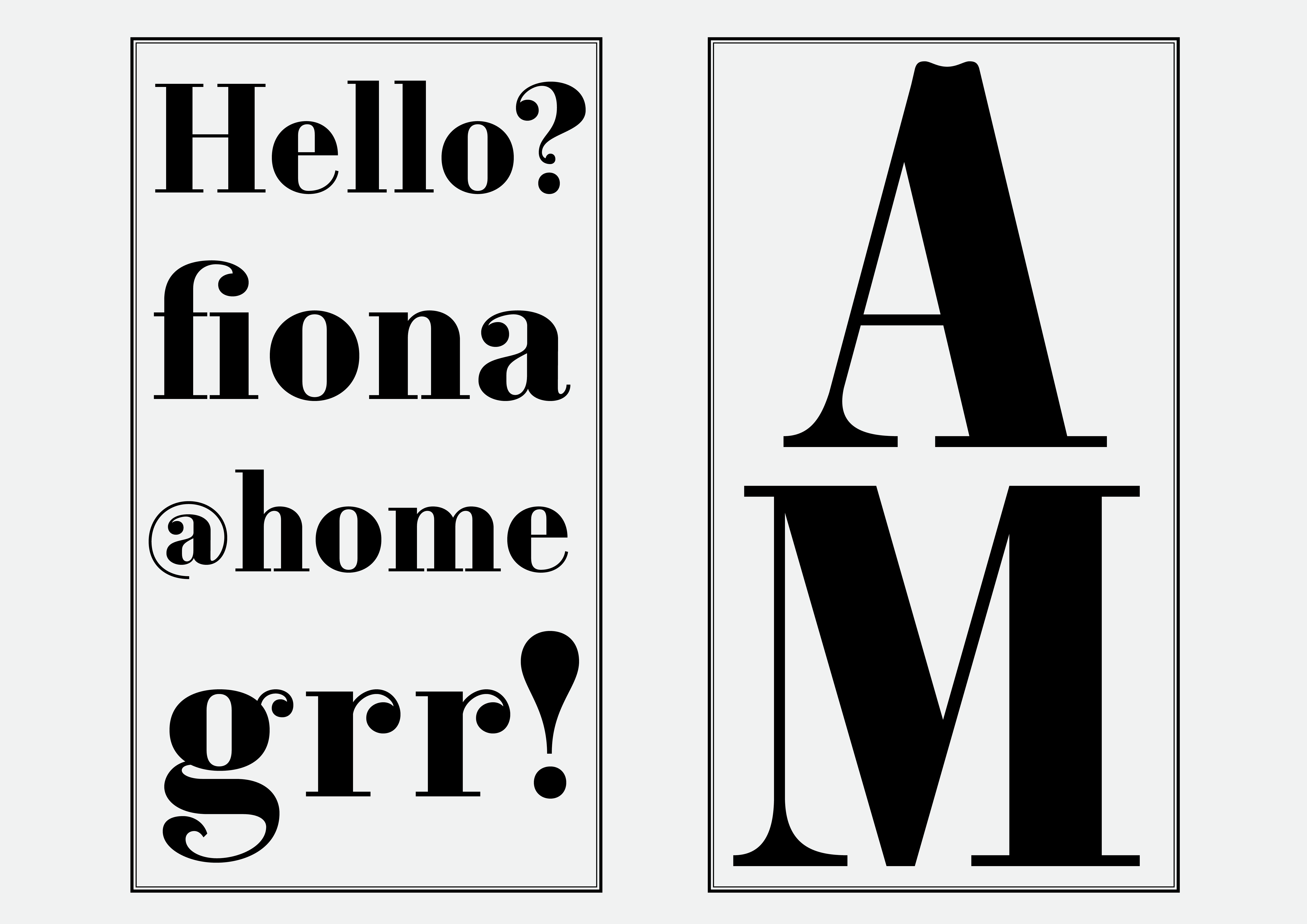 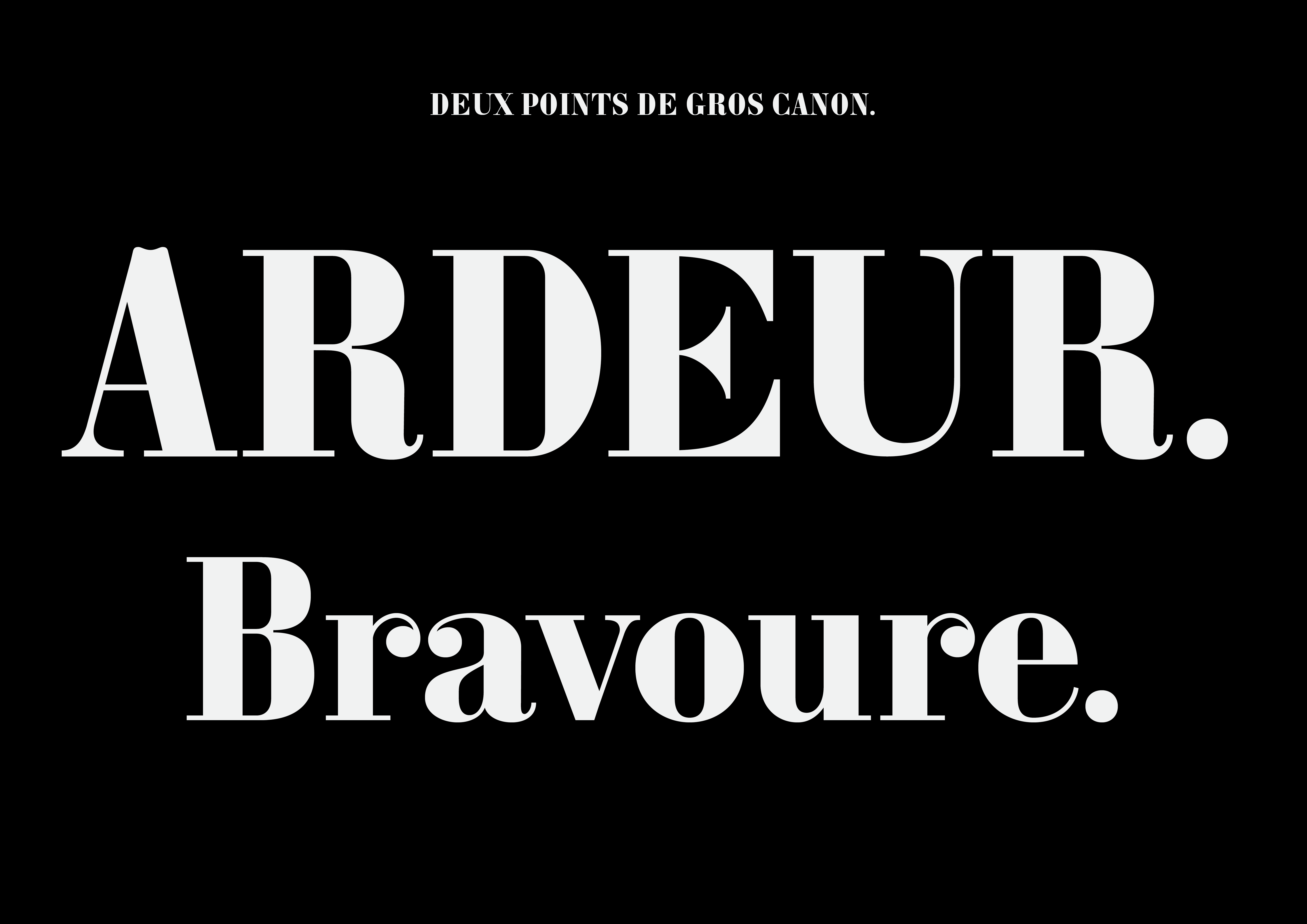 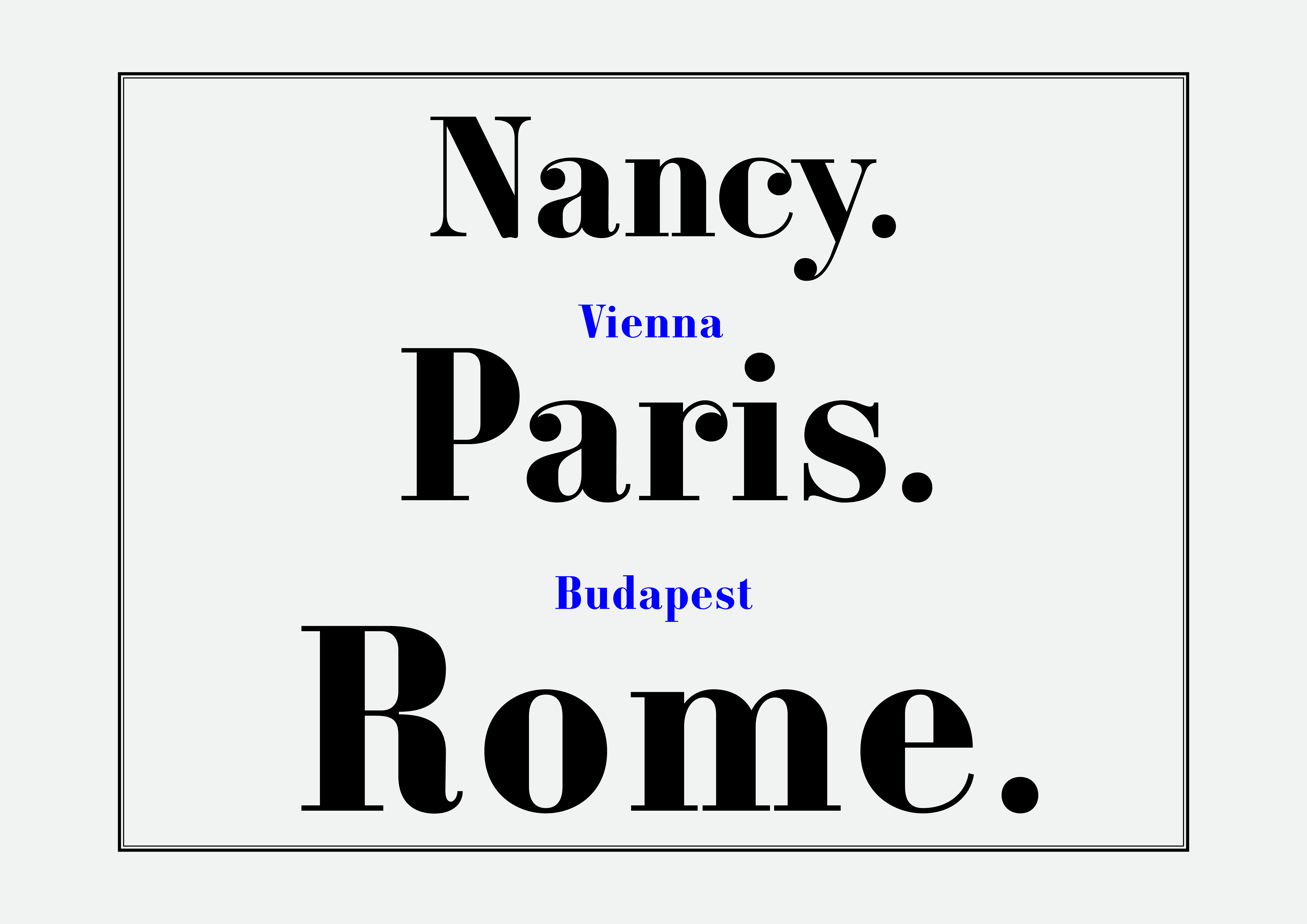 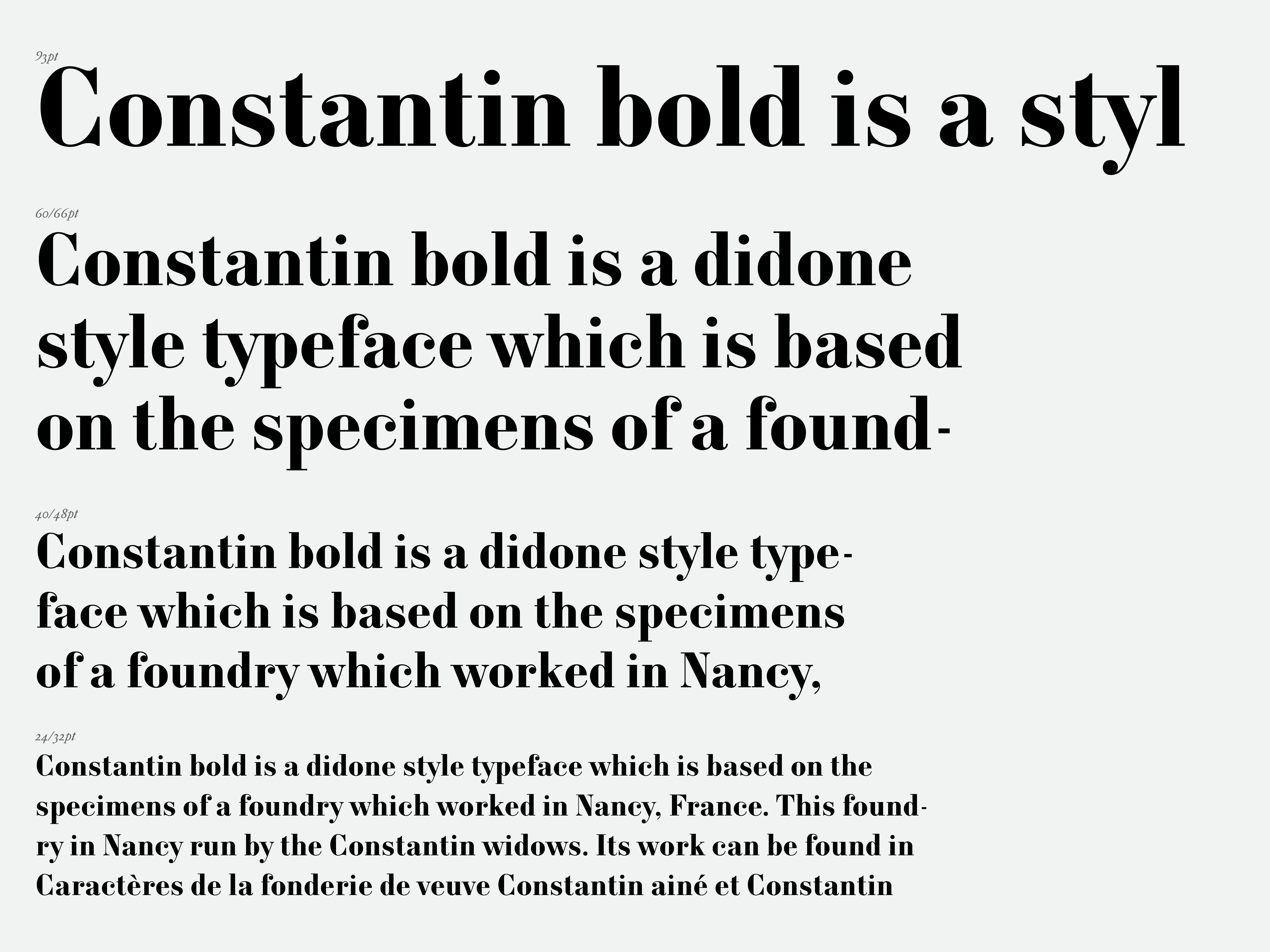 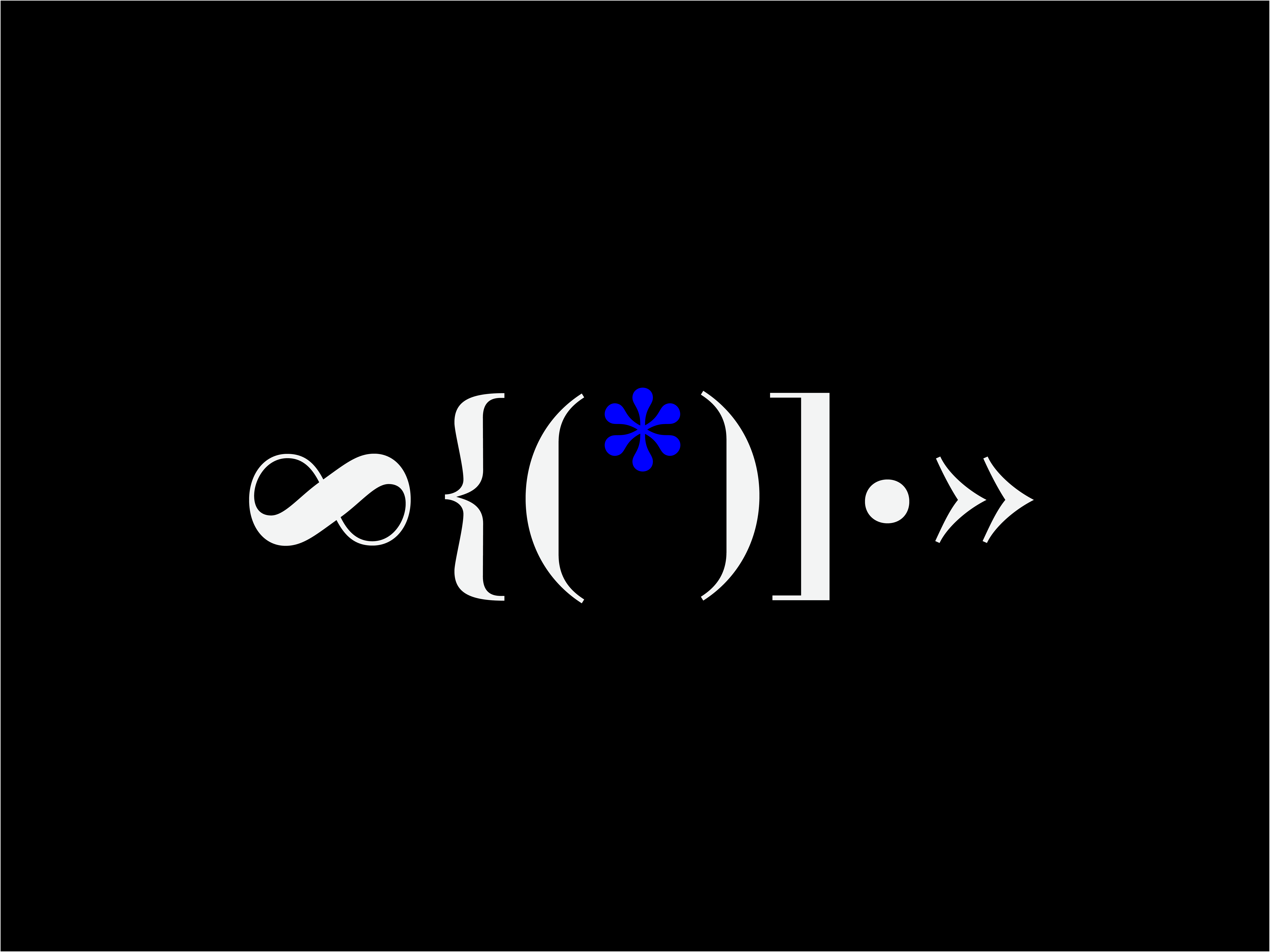 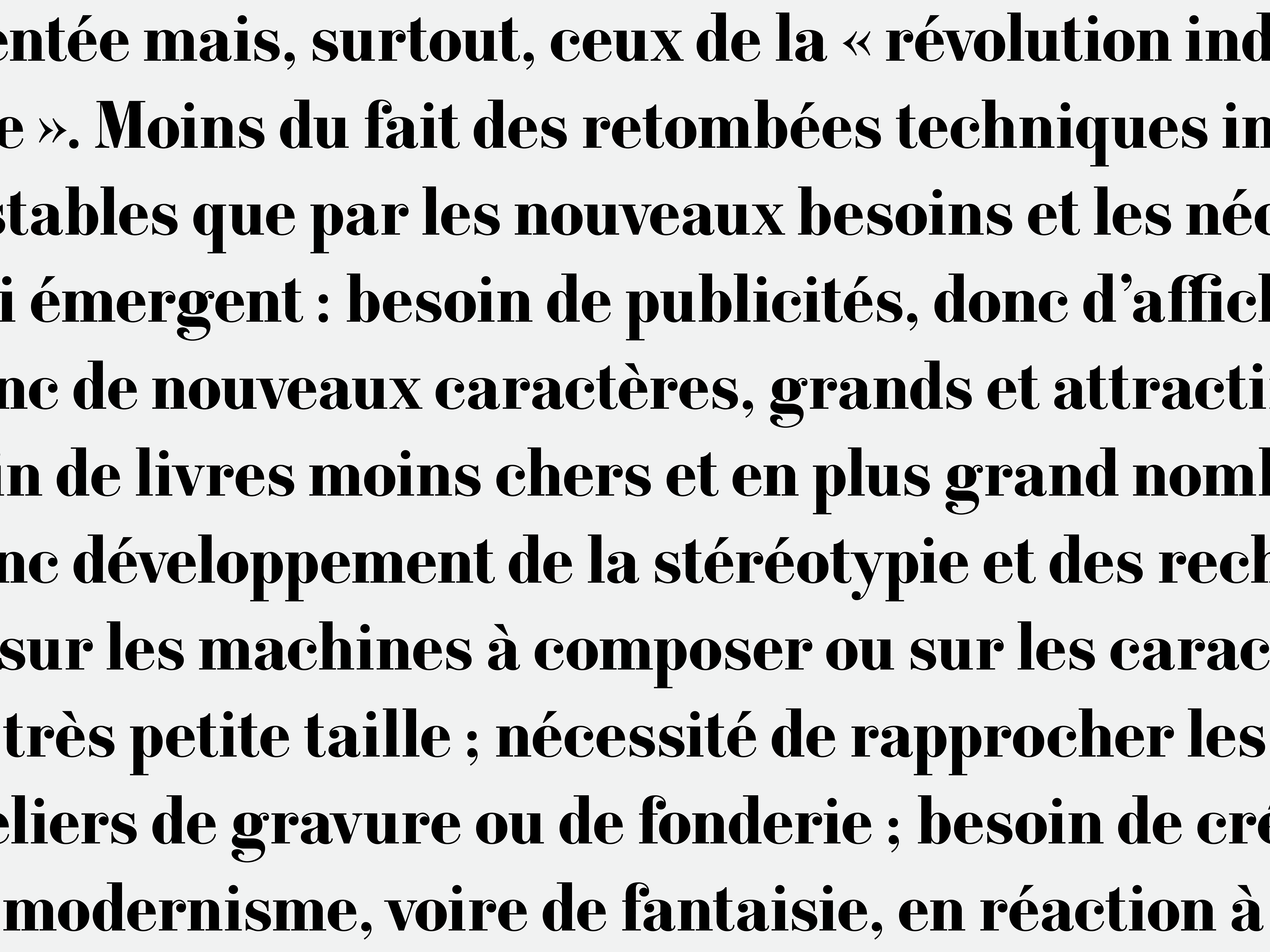 Constantine is distributed for the first time here, on Serifmag.

Kolonel is a Dutch oldstyle typeface, based on the letters of Nicholas Kis (Tótfalusi Kis Miklós). Kolonel is based on the 7 pt (colonel) text size which the famous bible of Nicholas Kis is printed in (1685, Amsterdam).
This typeface is also an experiment and was my research project at ANRT. The project endeavours to find a way to bring back the lively feeling of the letter press printed text to the digital medium. I was experimenting with creating different alterations of each letter, based on real inking problems, which I founded on Kis’s bible.
Even though I used sophisticated programming technics and variables for the shapes, I didn’t do it with the intention to achieve some kind of progress, but quite the opposite, my aim was to resuscitate something that has been lost in (printed) texts since the disappearance of analog printing techniques. 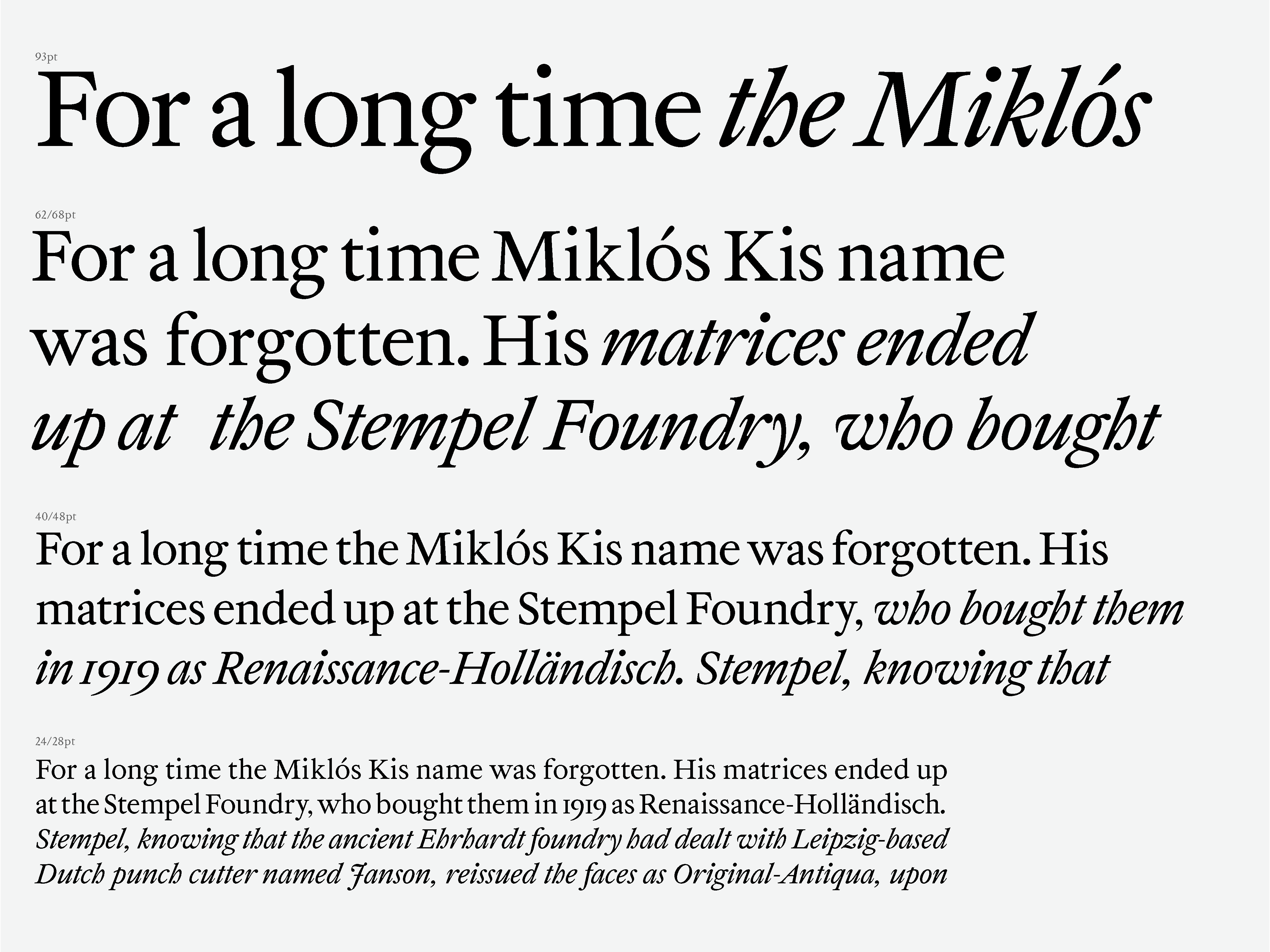 With the bracketed serifs and the slightly slanted axes of the ‘o’ ‘c’ and ‘e’, the typeface’s Dutch oldstyle baroque (transitional) characteristics were preserved. The contrast between the horizontal and vertical lines are present, but soft. The teardrop endings and slightly narrow shapes of the curves on the ‘n’ ‘m’ and ‘h’ reflect the typical Dutch style. The thickness of the lines was kept slightly emphasized both in the regular and italic version to reflect the original 7pt size, however, the intention was to make Kolonel well-suited for longer texts in the reading sizes of 9-11pt. 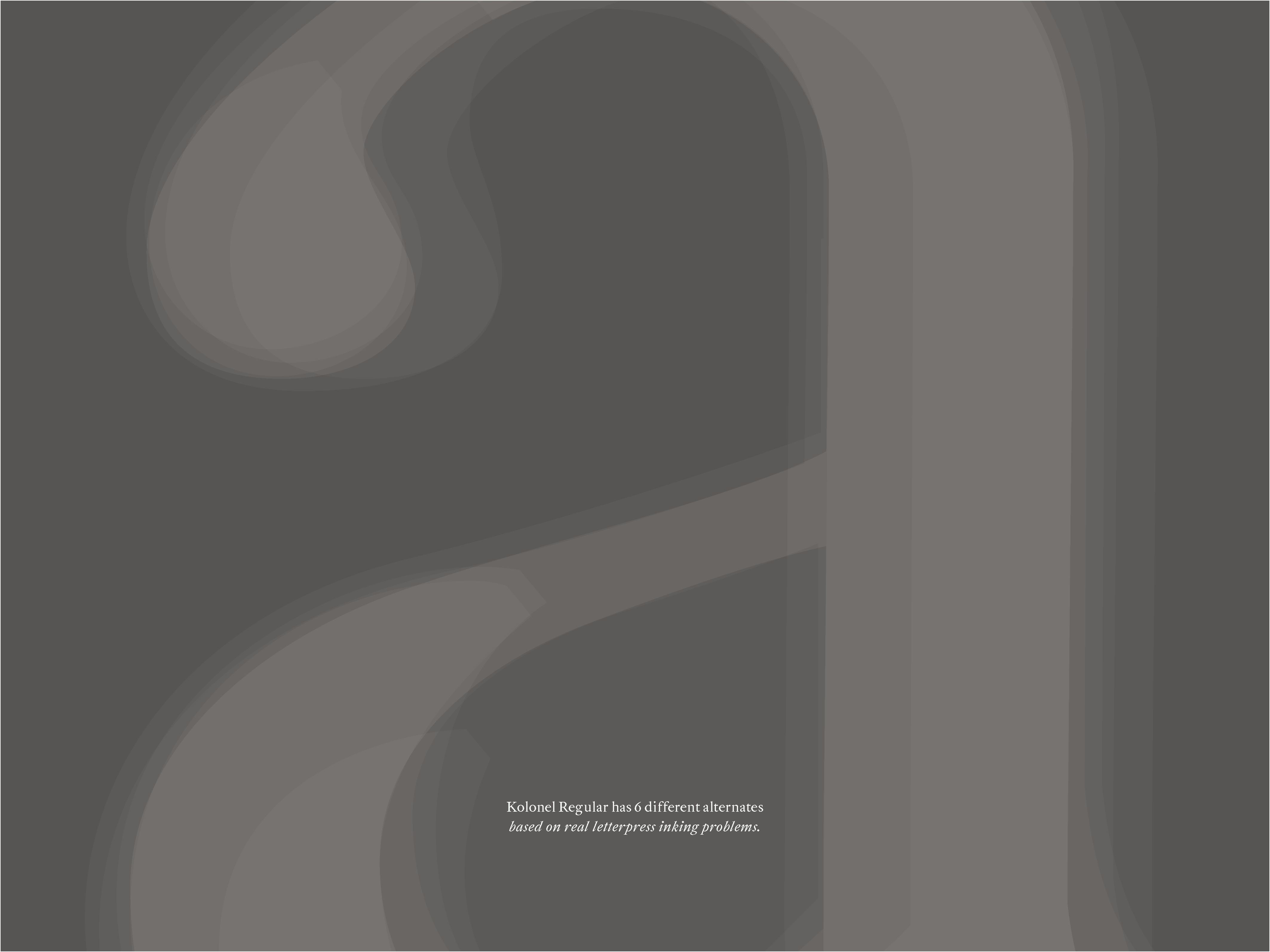 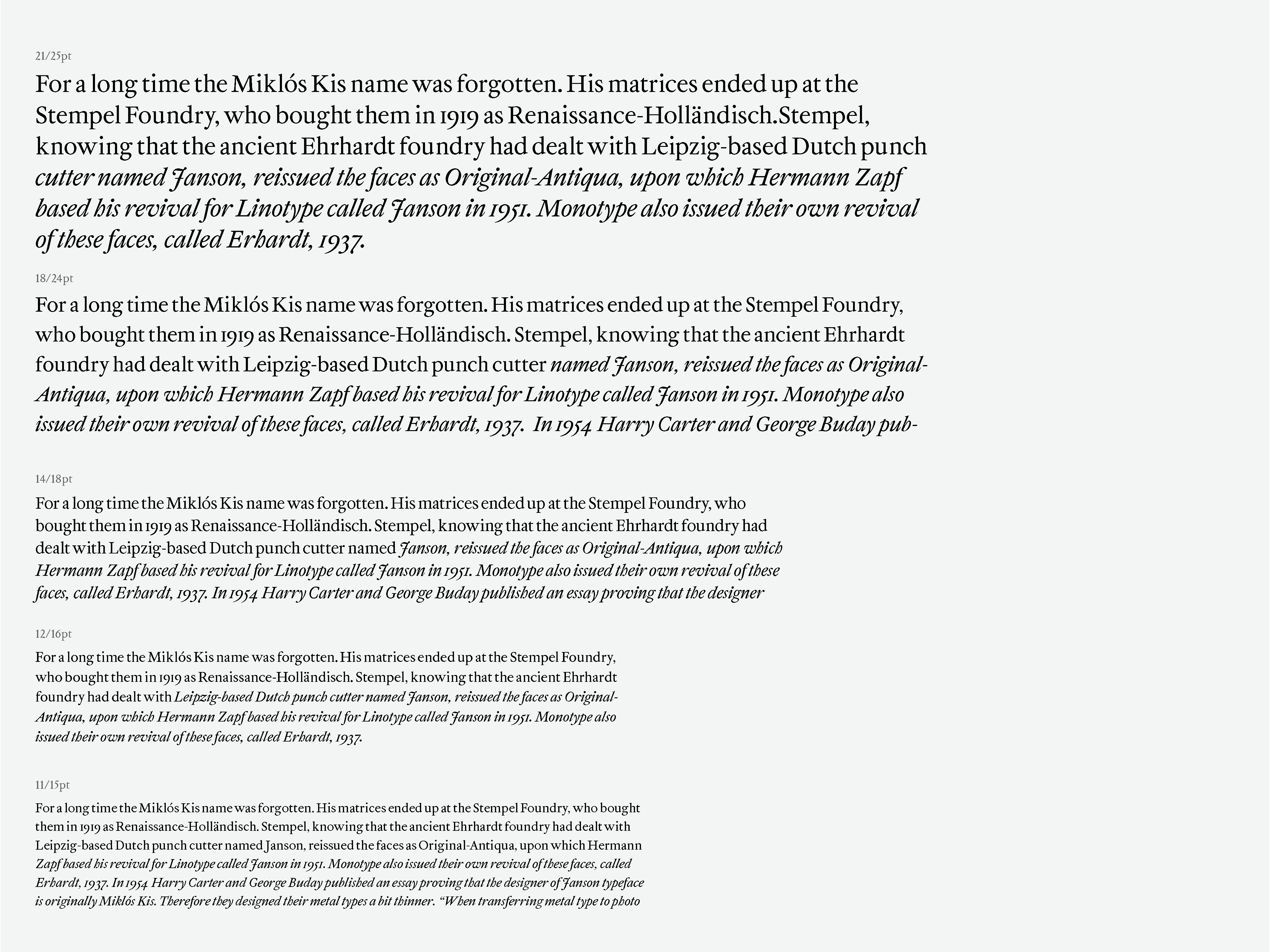 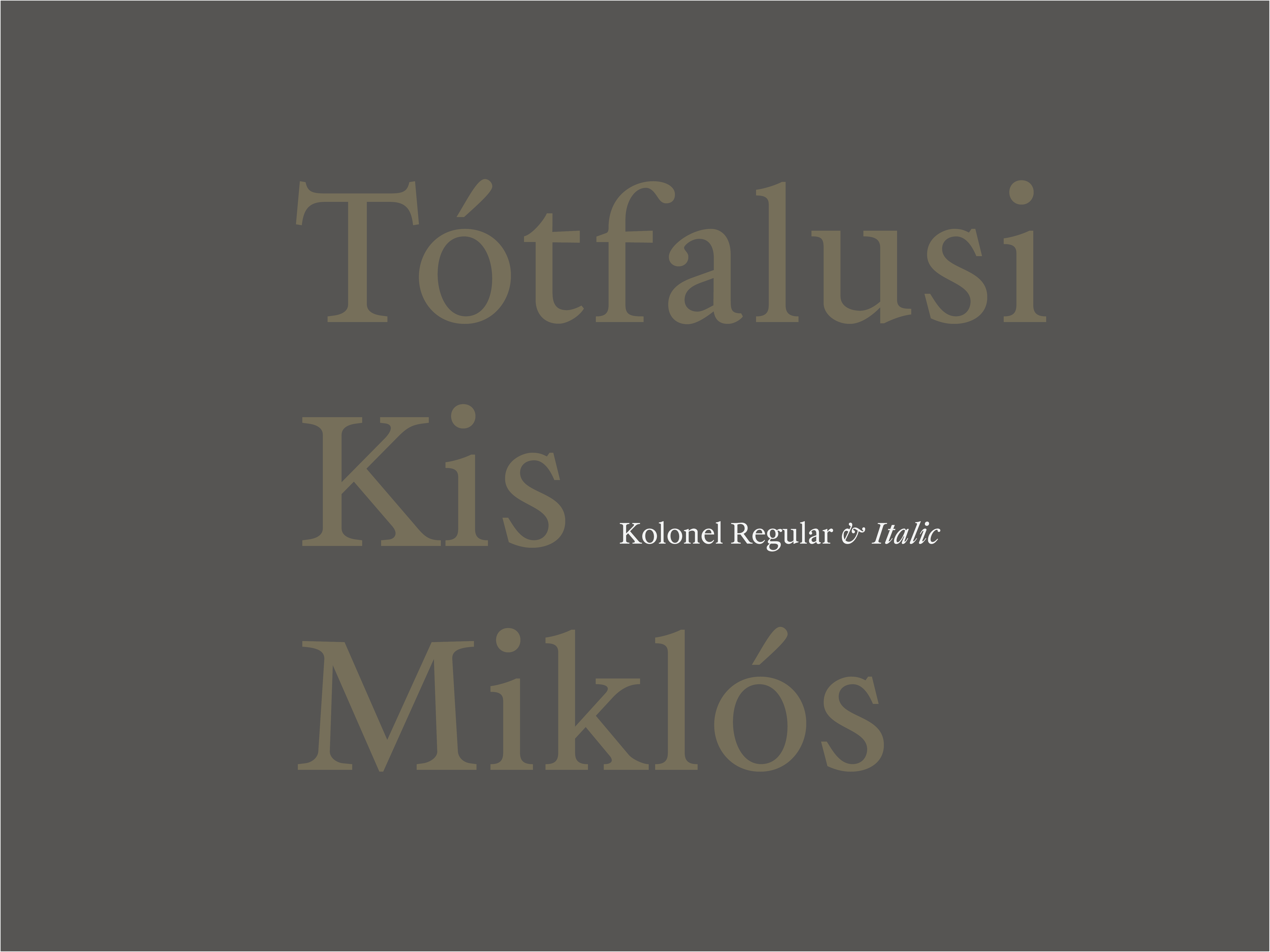 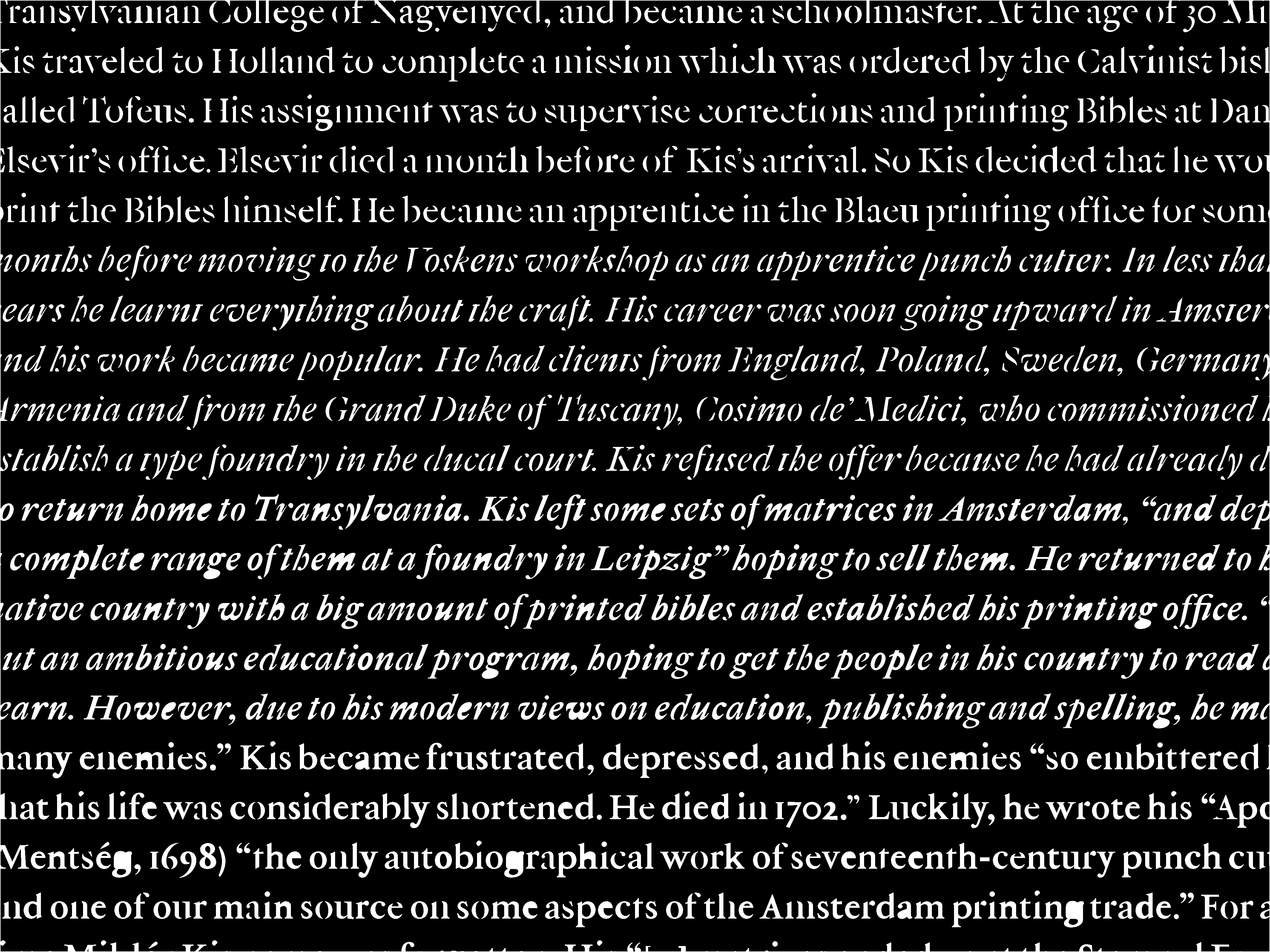 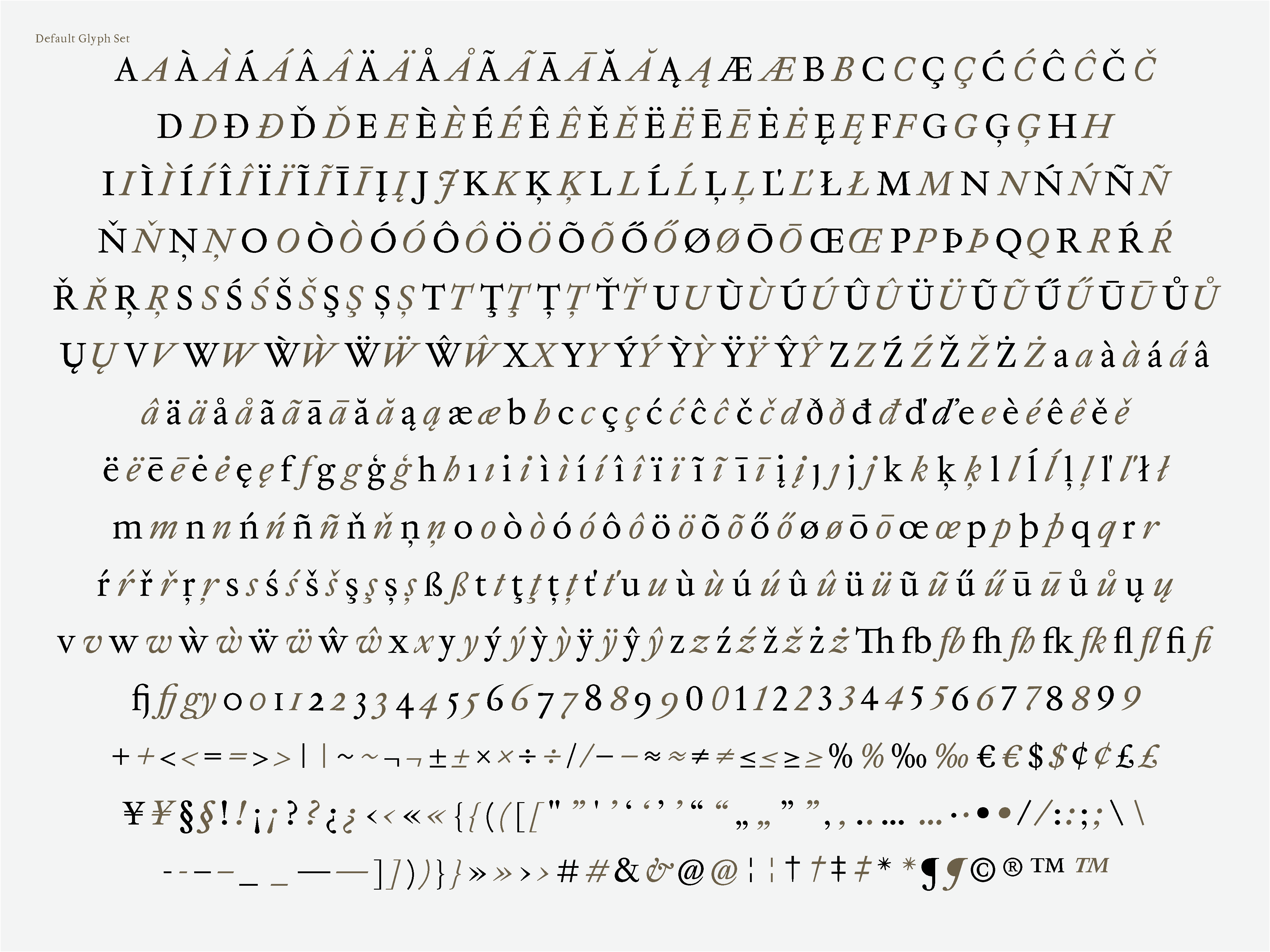 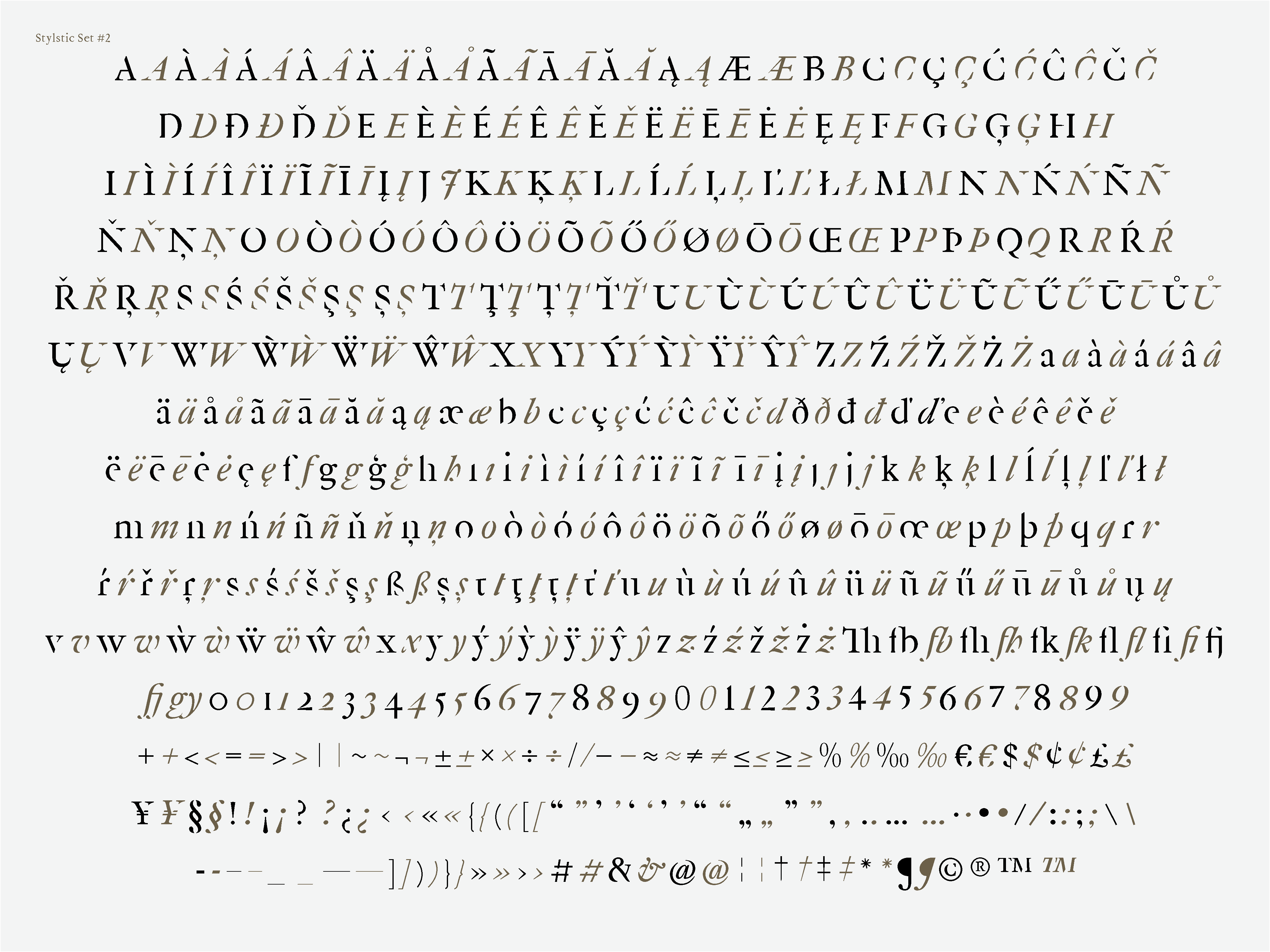 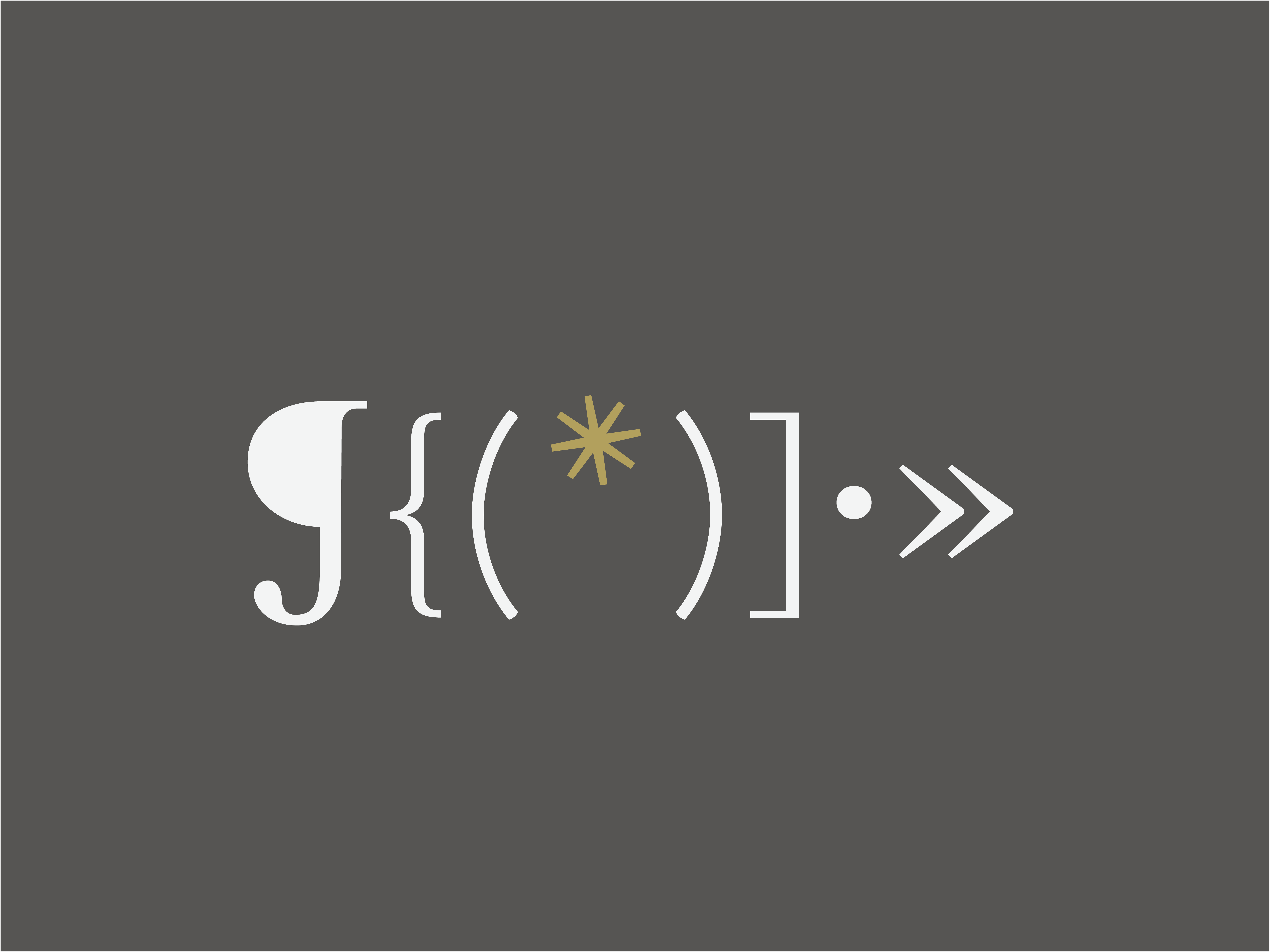 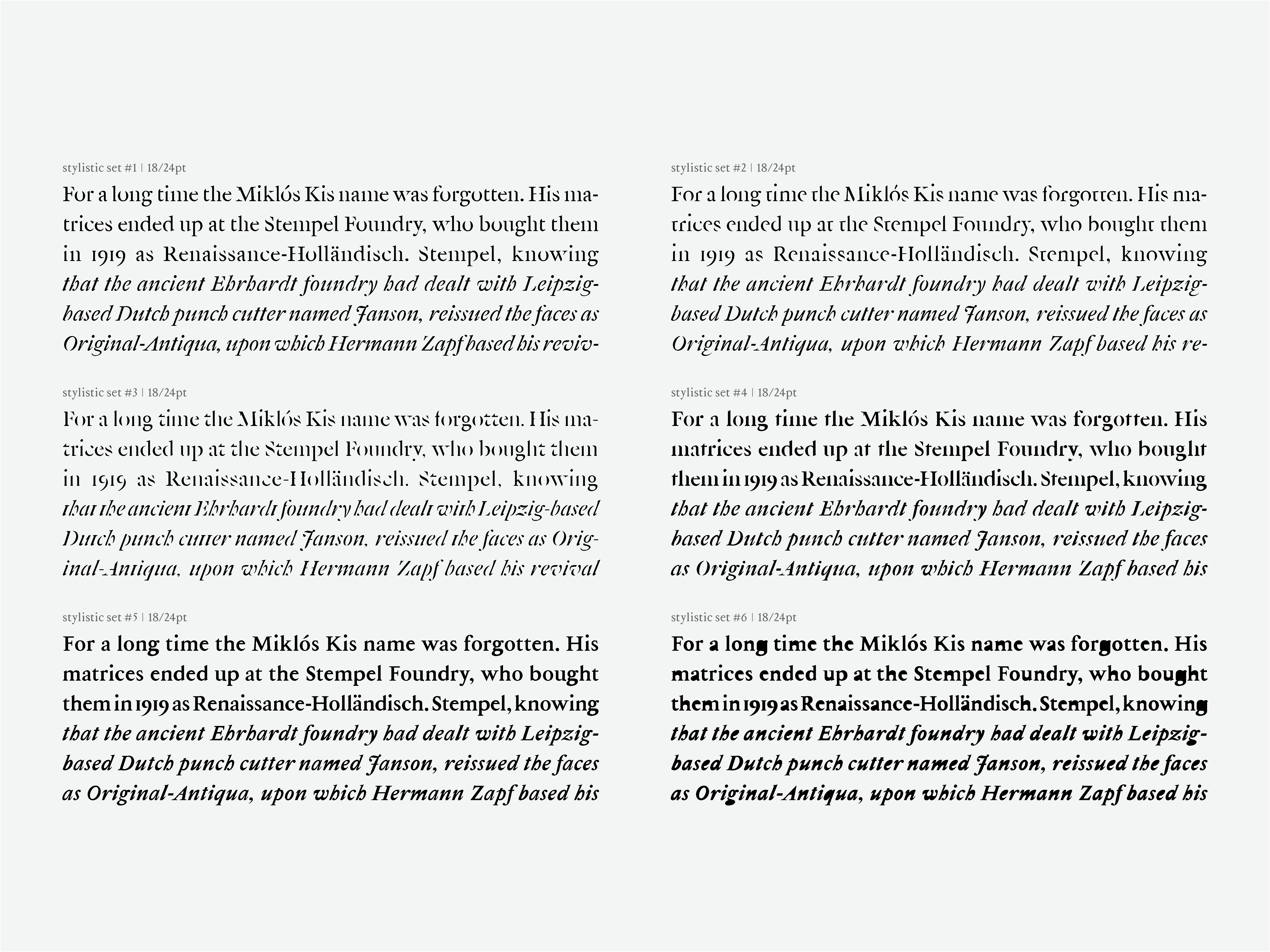 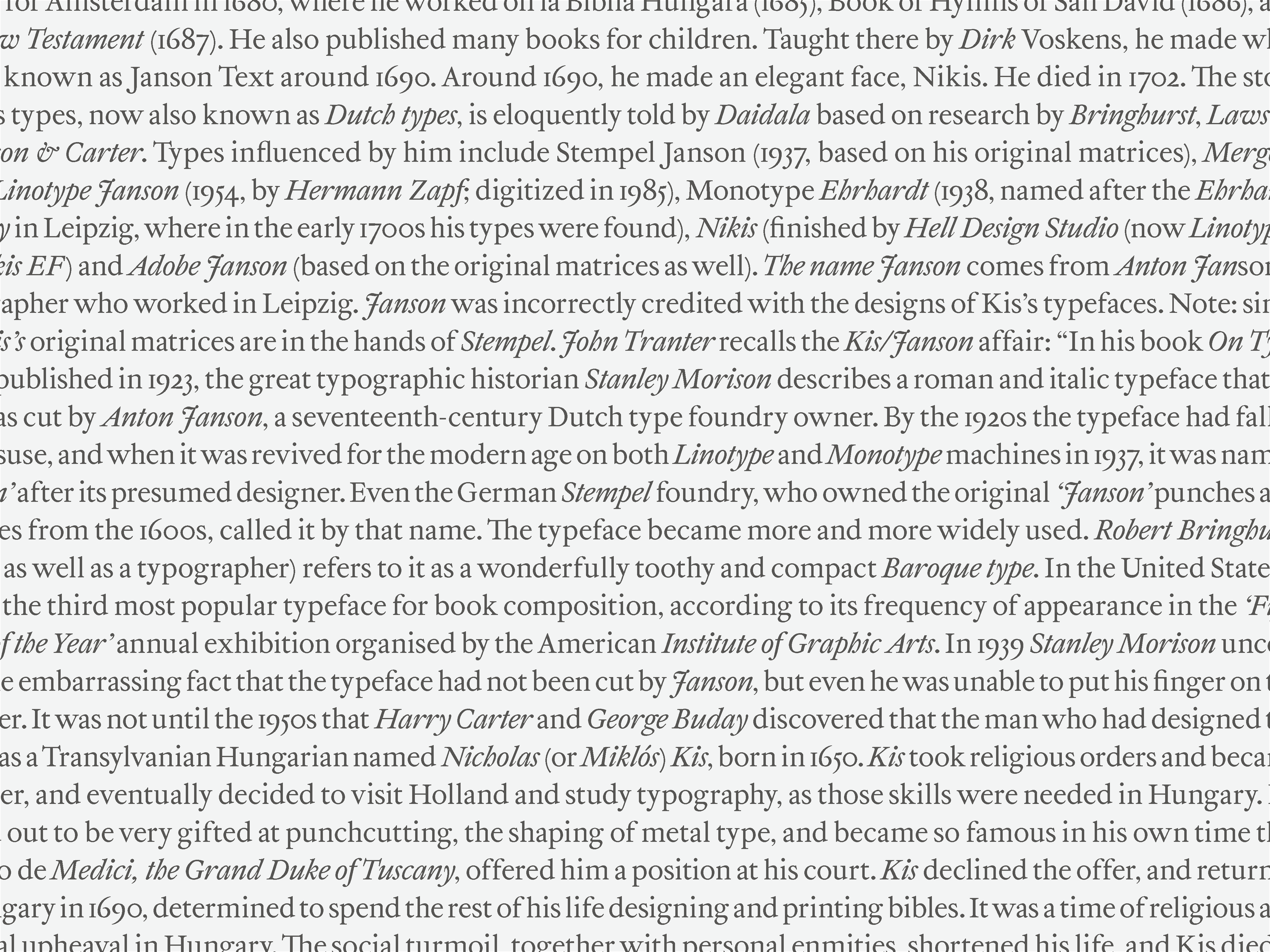 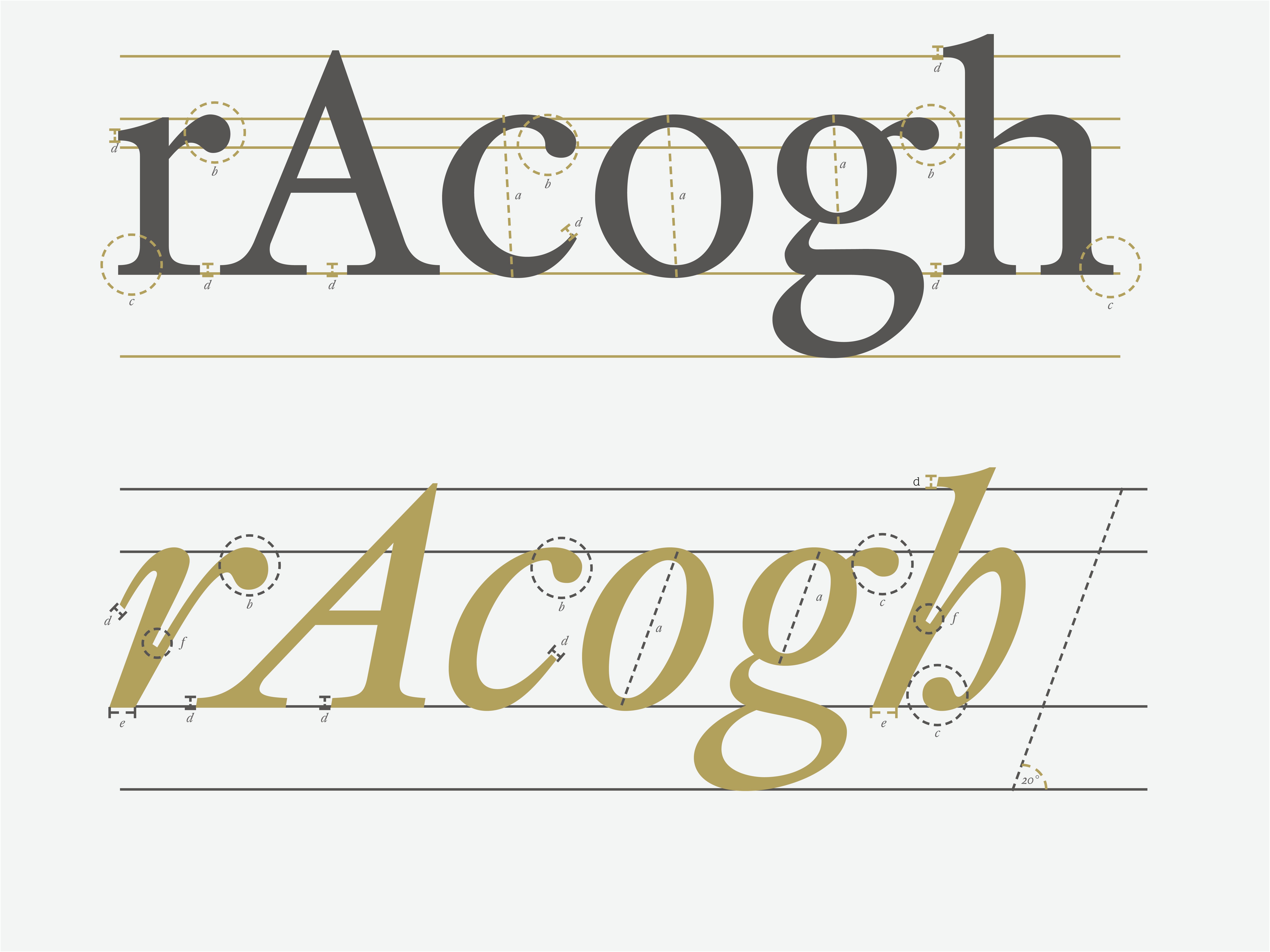 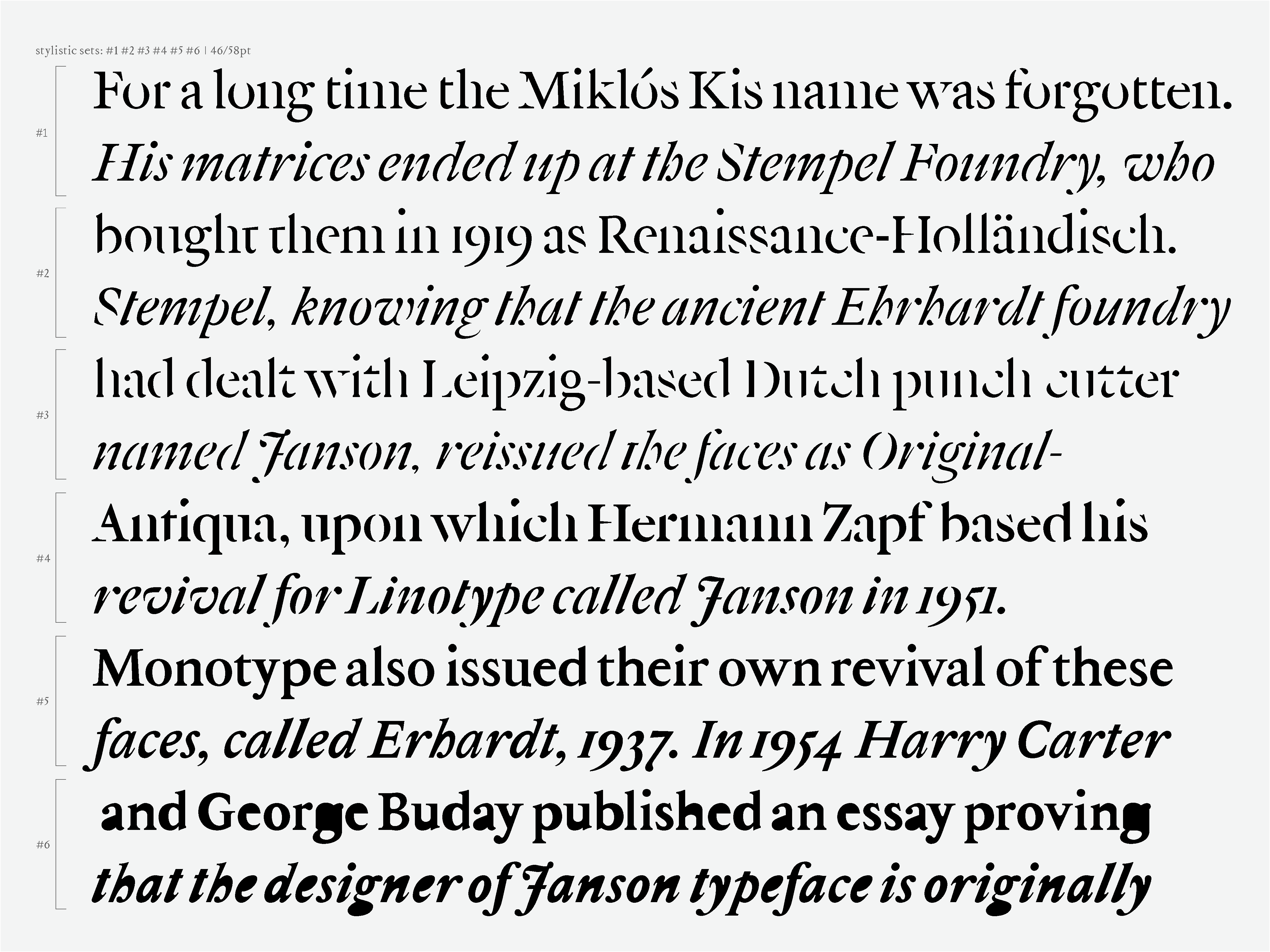 After finding the source (Kis’s Bible), then documenting and taking close-up pictures of its pages, I managed to create a system by classifying the letters from the pages: I examined the printing errors in all the letters, and attempted to categorically fit these errors into a coherent system.

Kolonel will be distributed soon for the first time here, on Serifmag.

Mozsár is a café and restaurant with a slightly bohemian and a slightly constructivist atmosphere in the city center of Budapest.
I was asked to design panels on the façade of Mozsár. I decided to create a font which tries to reflect the atmosphere of Mozsár. My other aim was to have fun and raise a feeling for freedom designing these shapes. Also, I was curious whether it was possible to create a unified and coherent brand image using letters only. Mozsár is a custom display font. Every letter has an uppercase and a lowercase version. The characters are based on geometrical shapes.j 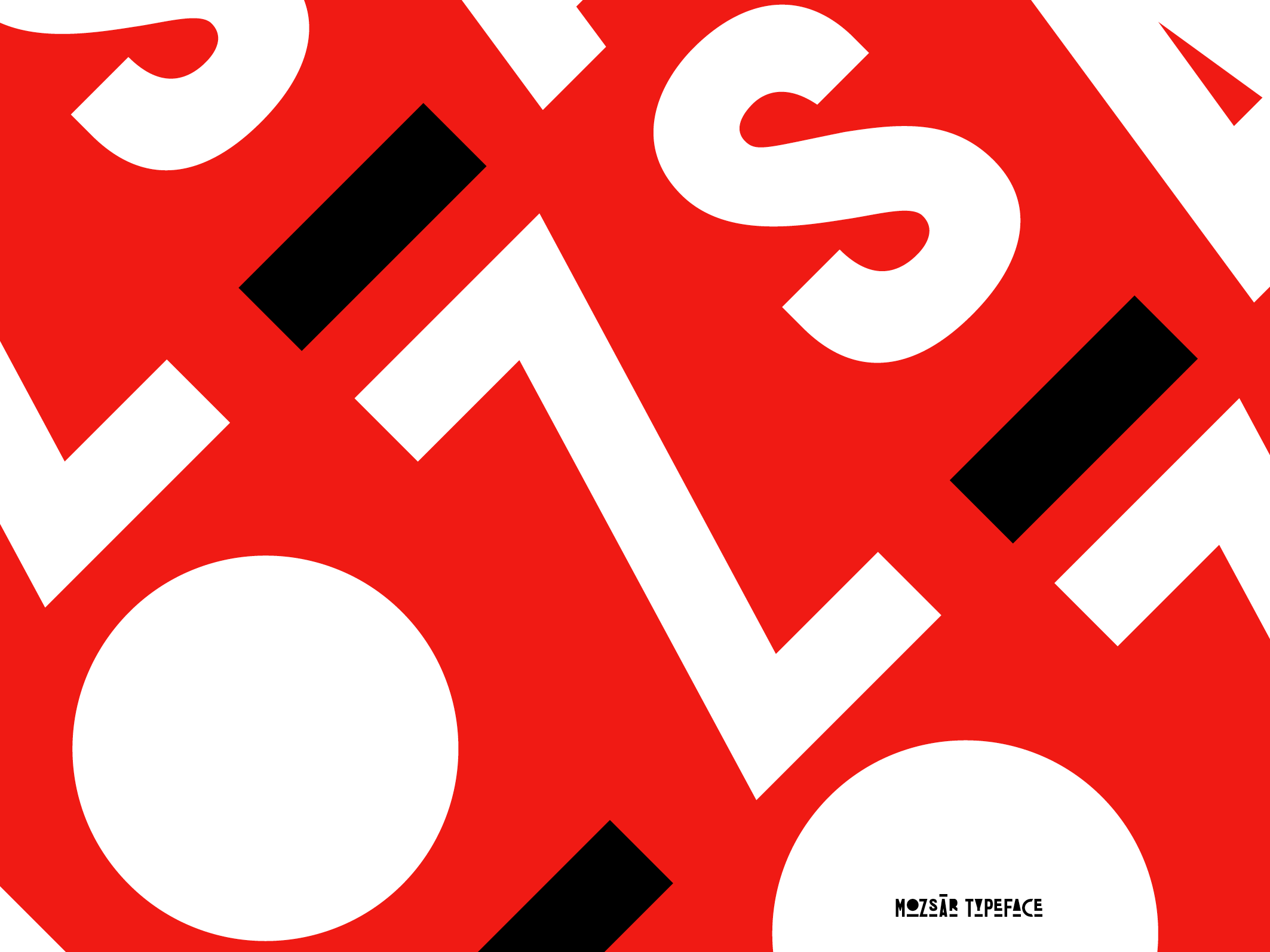 This is a unicase display typeface with a nod to the constructivist spirit. Tongue-in-cheek by design, it uses pure geometric shapes while departing from strict typographical rules. It was not designed to display blocks of text given that it is quite tiring to read.
The central idea behind this typeface was experimental in nature, namely that the two variants would randomly mix while text is being typed and the Contextual Alternates are switched on in Adobe Indesign, MS Word, Text Edit, etc. It was intended for display purposes. 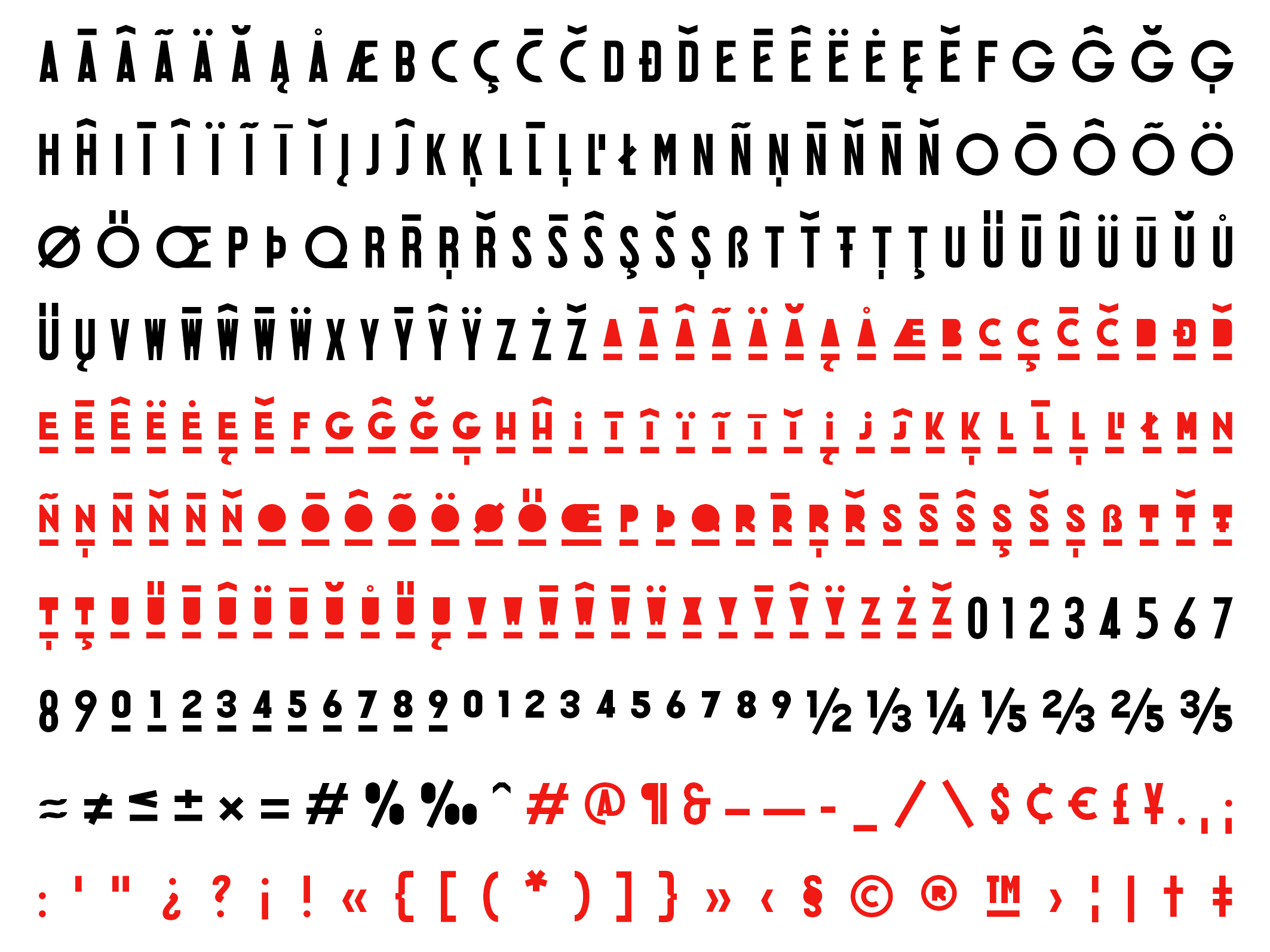 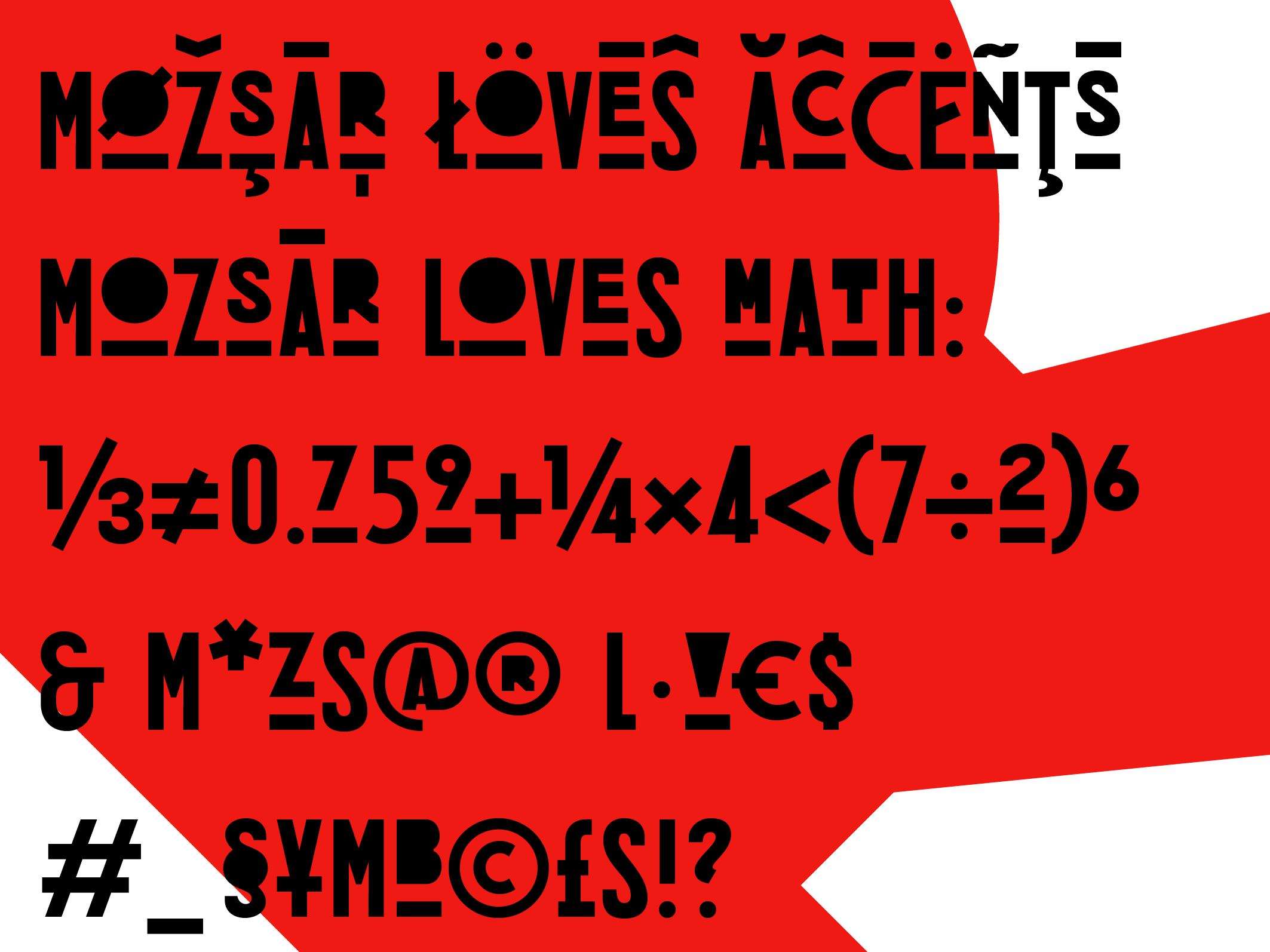 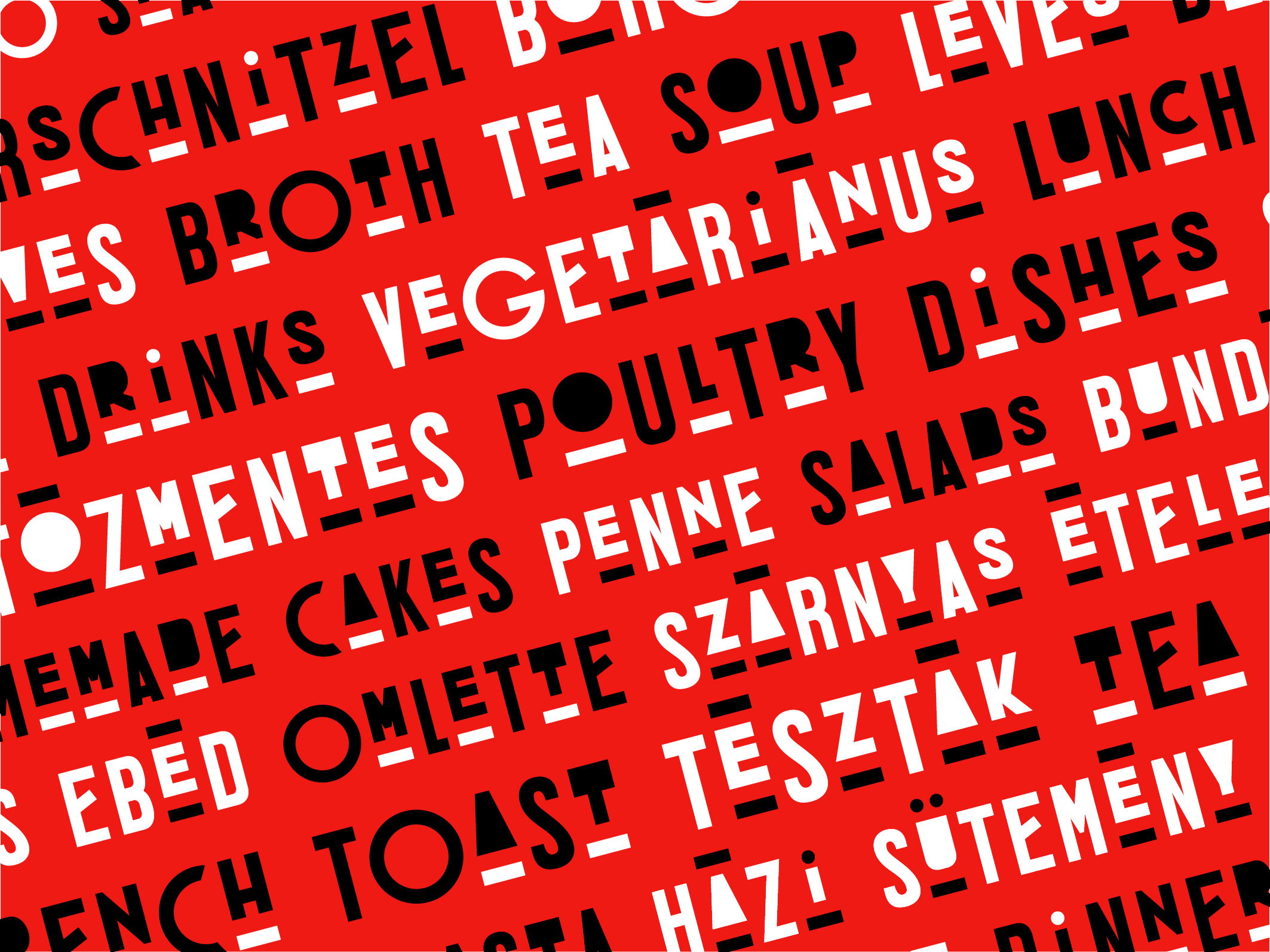 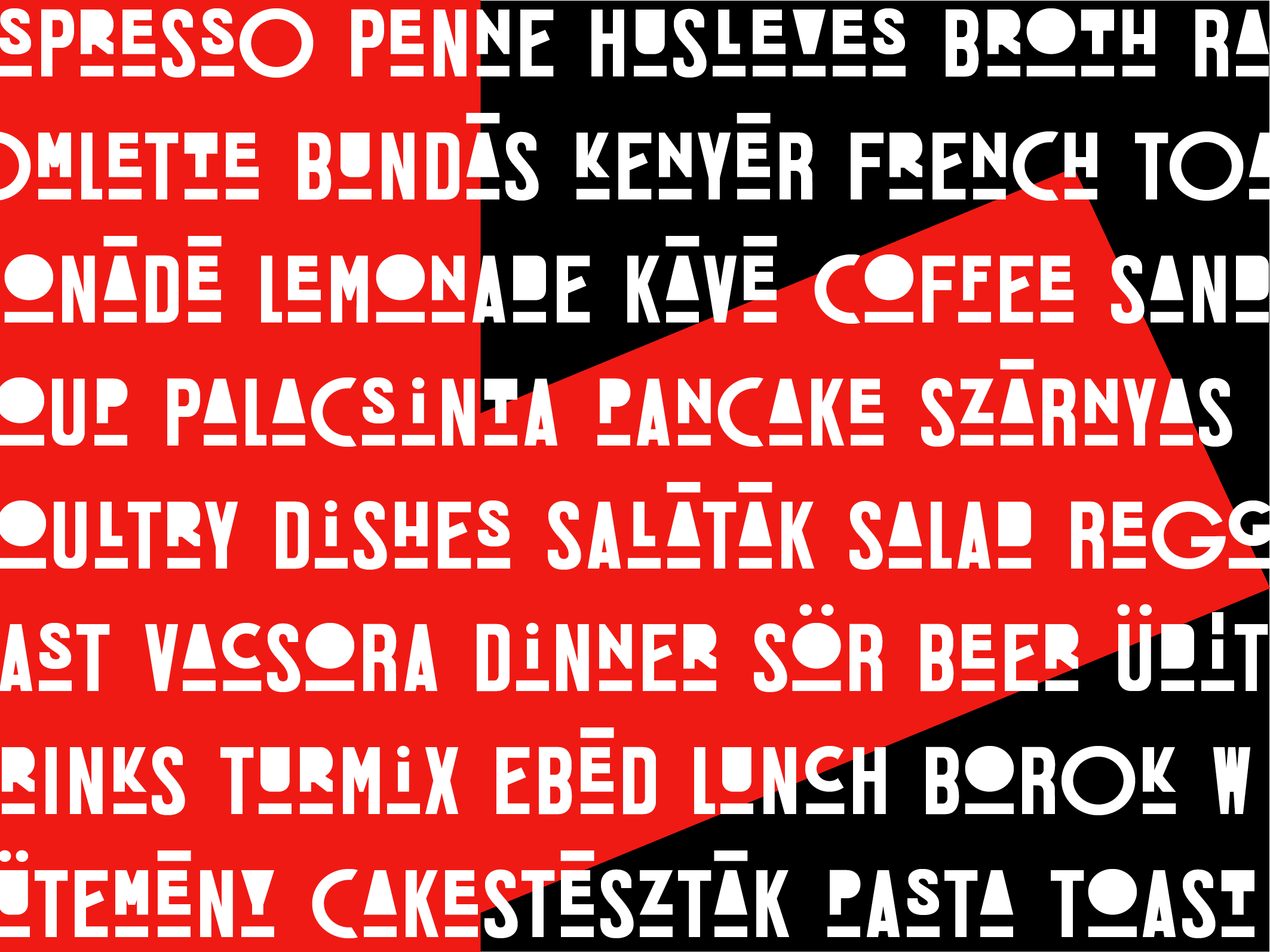 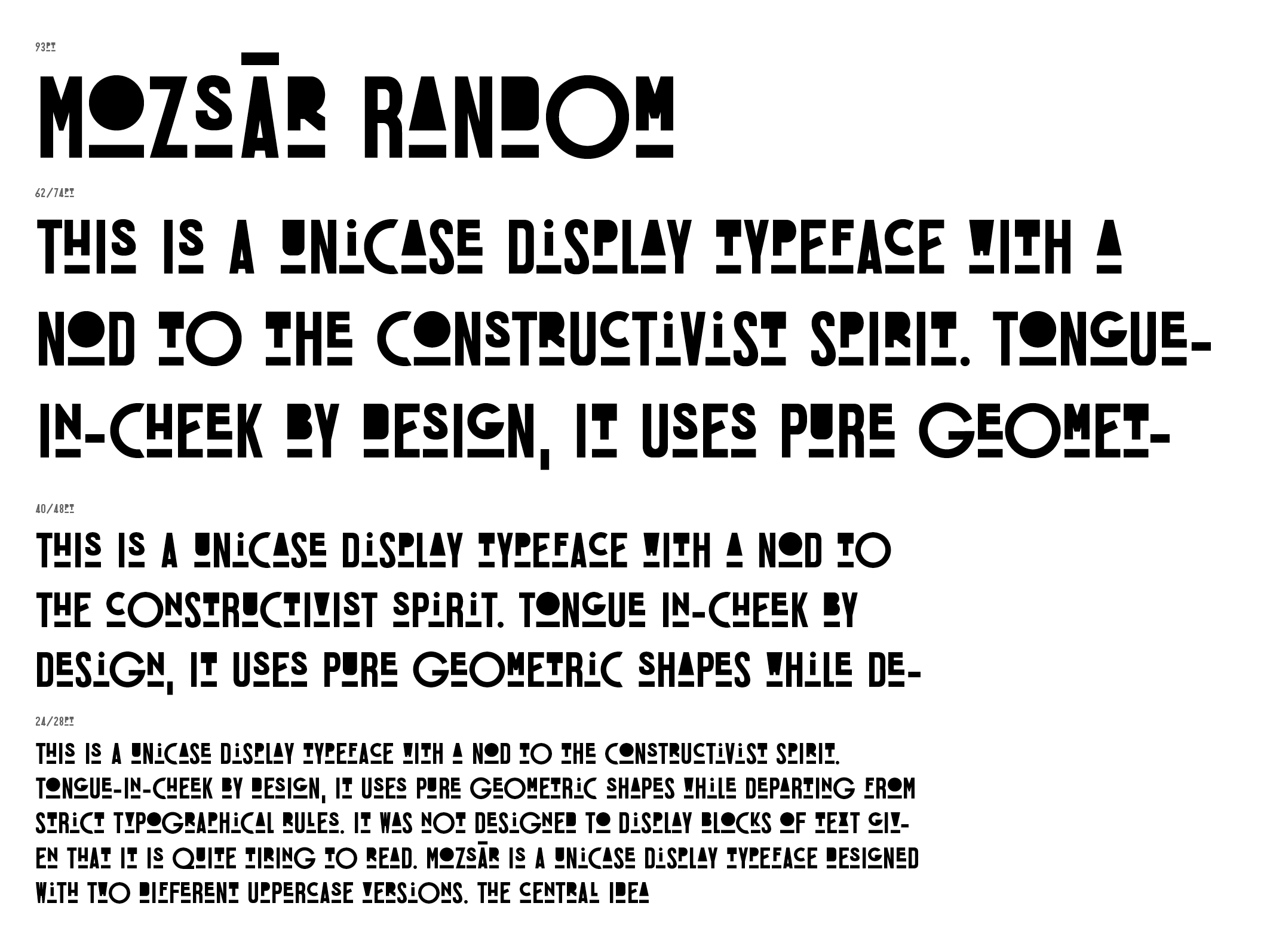 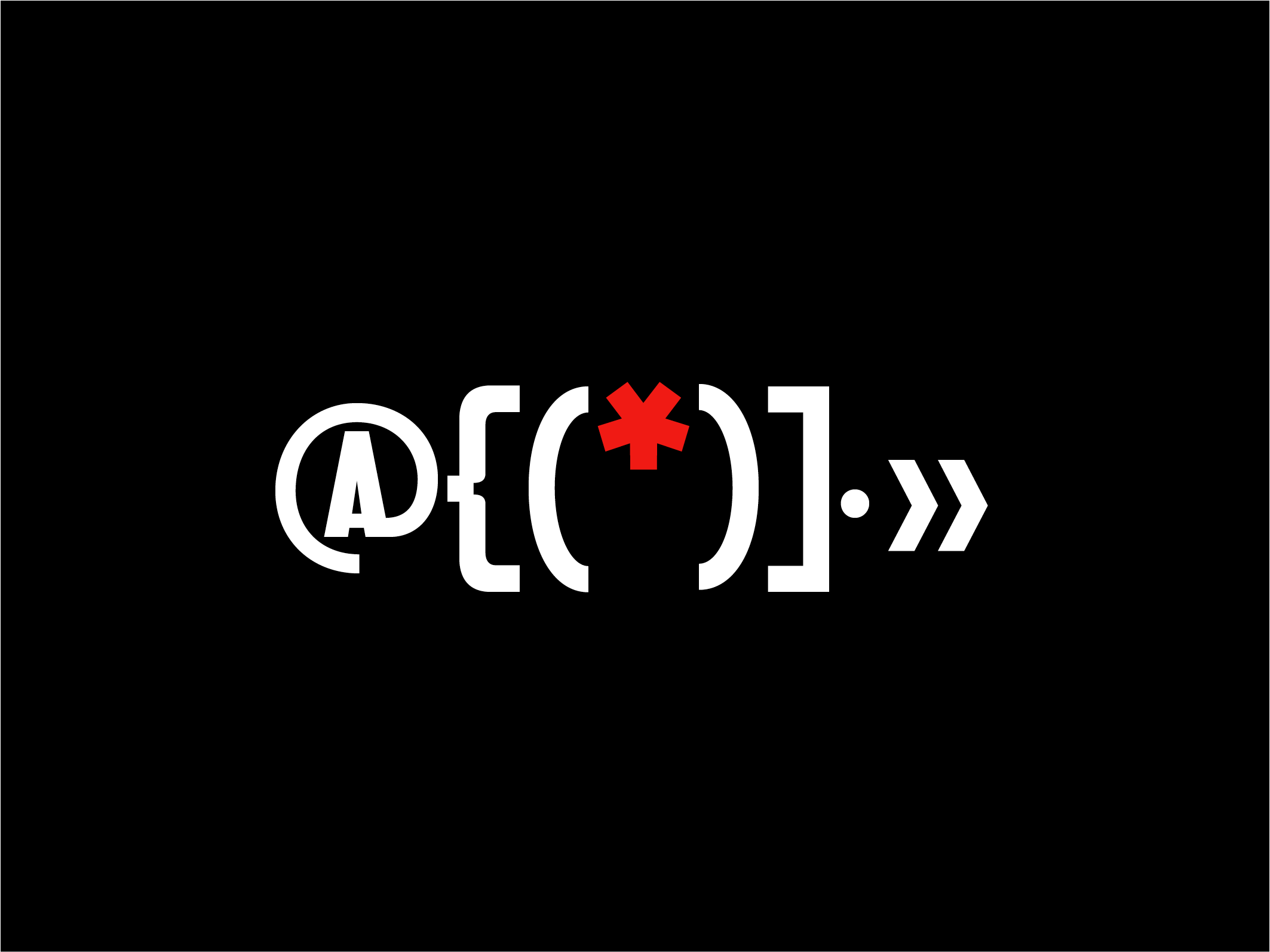 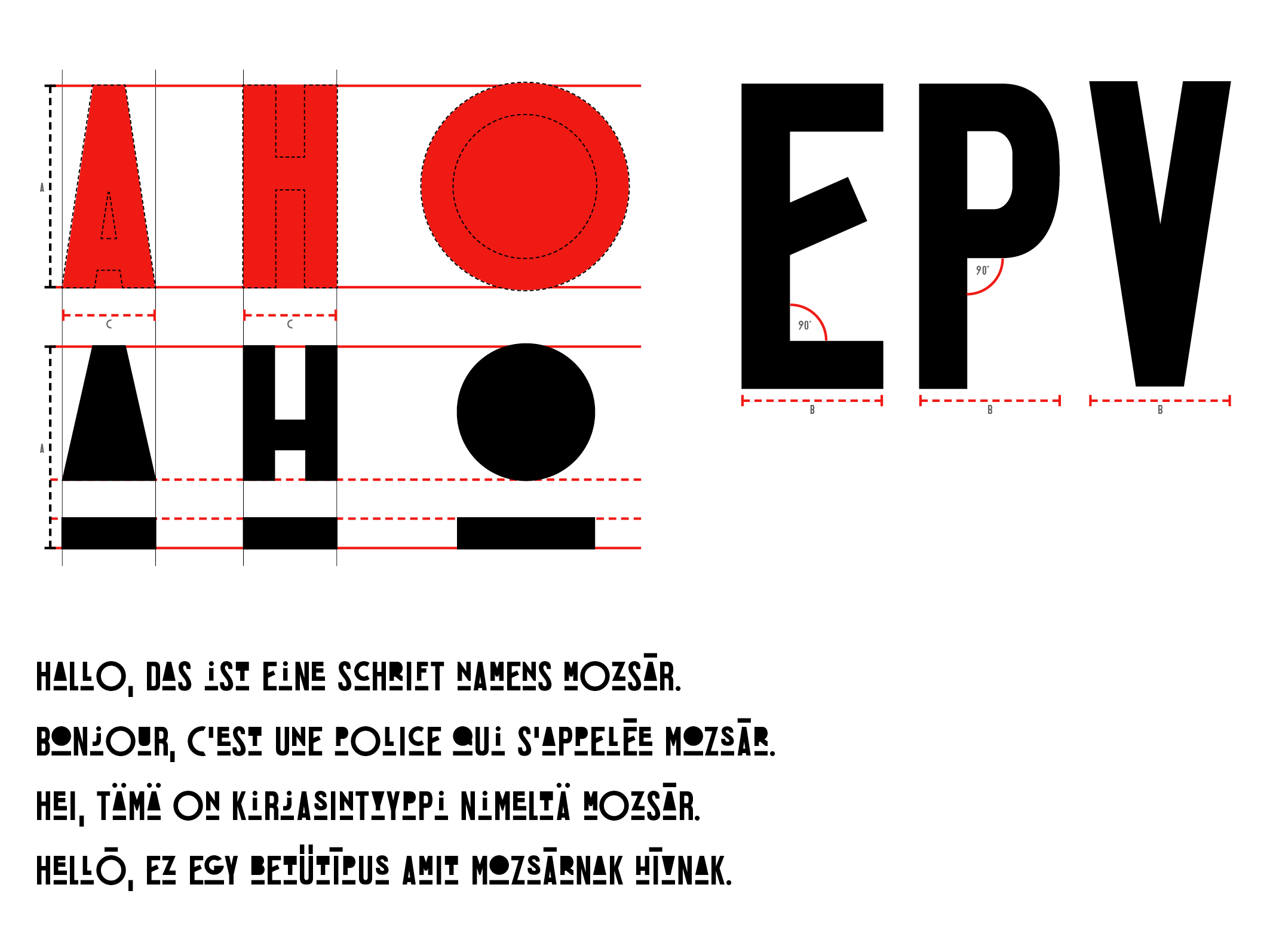